Check us out at www.preservationmonthly.com - we are also on Facebook now - signup for our page.

Property Preservation contractors, make sure that when you go to a property you have your work-order in your hand, you may need more. You may never know who you are going to run into.

To Use A Short Sale Negotiator Or Not?

To Use A Short Sale Negotiator Or Not?

Tough Question! There are a handful of good companies providing a great service to listing agents. Unfortunately there are many that simply obtain the components of a short sale package, submit it to the lender, and then cross their fingers and wait. This is NOT short sale negotiation! If that is all they are doing then we need to use different nomenclature... they are then merely a short sale facilitator or processor.

A Call To Service

There is a great need to boost the image of the real estate professional. Giving the benefit of the doubt to most if not all participants here, we all do a resaonable job. Let us look at a few areas that will propel us out of a "notch above used cars salesman" to something more like a designation like a firefighter or police officer. Firefighters protect lives and property. Police officers protect lives and sometimes property. REALTORS PROTECT BOTH BUYER AND SELLER AND BOY DO WE HAVE A… Continue

Regardless of your political leanings and regardless of your economic philosophies, much of the country will see continued rise in foreclosures for 2010, if we stay on the path we are currently on. A jobless recovery, isn’t a recovery!

Social Blogging Will Attract The Masses

If you watch teenagers these days they are forever texting each other. I dare not ask what about – but they do spend all day with their fingers on that keypad. Of course I am talking about cell phones and some reports suggest that teens spend more on text messages than on actual calls.
Social blogging seems to be the ‘grown up’ form of texting. It certainly has a big following with many of the top web identities having a ‘twitter’ or ‘plurk’ accounts. The difference between texting through… Continue

Fewer Americans are willing to purchase a distressed home compared with six months ago, according to a new survey.

Now is not the time for Americans to start getting cold feet about buying foreclosures.

Not that their reasoning isn't 100% sound. Buying a foreclosure carries plenty of risks, and in some markets it will put you in competition with investors who are way out of your league.


But if foreclosure filings stay on track, more than 4 million U.S.… Continue

Thousands of delinquent homeowners won't need to worry about eviction -- at least not until January.
Maybe the banks that put foreclosures on hold during the holidays really are doing the homeowners a favor. Maybe it really is out of a sense of holiday goodwill.
But, chances are, public relations plays a big role in the decision, too.
Citigroup announced yesterday that it will put foreclosures and evictions on hold through Jan. 17, and Freddie Mac and Fannie Mae also announced… Continue

According to a recent article in Managing REO-

With the passage of the Protecting Tenant at Foreclosure Act, the expansion-minded TenantAccess is increasing its capacity to service all of the United States.
The company, a subsidiary of FirstService Corp., recently hired 348 property managers to be in charge of maintaining buildings, paying bills, collecting rents and communicating with tenants. As a vendor to property owners, including government agencies, TA’s forte is… Continue

Ok, I have to give credit to Robin Rowland for tipping me off to this originally. I made a few calls and here is what I've found out.....

The idea is to help speed the process up, but hey we all now how that is!

Now throughout the years, agents have all felt unappreciated by one buyer or another and we have cut our commision or bought that home warrenty to make a deal work. Well, now a new gimmick has come to the forefront. It's the first one I have heard of, but I am sure it won't be the last.

My office had a deal going on a short sale. Yes, it was the typical short sale with all the bumps along the way and aging a another year by the time it was done.

The bank in this case,… Continue If you said have it towed or call a junk yard/dump you’d be dead wrong. Apparently no one wants this heaping pile of junk. In fact all of the junk yards within a 30 mile radius of the property wanted to charge me between $900-$1400 just to take it in……plus the tow. Try explaining that to your AM. You’ll probably get as far as I did which was “let’s try and figure… Continue

The suit was filed on behalf of homeowners facing foreclosure who say there has been no progress made with regard to negotiations with their lender.

"And that's why what we're calling for in this lawsuit," explains attorney Matthew Q. Callister. "(It) is an automatic stay of any further Bank of America foreclosures until such time as every Southern Nevadan avails himself of his right under federal law to have that fundamental 'good faith' negotiation."

I was talking to a loan officer yesterday, he just finished a training on the new RESPA rules and he told me that now to give pre-approvals for buyers they must have an executed contract of sales, because they must have all the information on the specific property they are purchasing in order for them to give the buyer a Good Faith Estimate. We couldn't discuss all the changes and how them will affect our business. I have to read more about and maybe go to one of the seminars myself. I know… Continue

Short sales or Reo..or a default by any other name..Has anyone see the loan mod work?

Ahh to be in the days when Ned Flanders talks about trying to help people out of their foreclosure messes, having time to dig into the why and wherefores..Today has been long as I closed on a perfect sale, clear title on my sellers property, buyers with no contingency and 810+ scores, 20% down..and it still took 4 hours. The appraiser made just a little tiny note that the underwriter questioned..at the last minute..two months after the appraisal. They sure don't like to lend like they used… Continue

Are You Working Your Linked In Contacts? You'd be surprised at whom you're connected with!

I listened to the Blog Radio on 12/18 and even punched in to ask Jesse a question about signing up with all the Asset Management Companies. After listening to the show, I took Jesse's advice about utilizing Linked In and Facebook to our advantage.

I was already doing something similar, which is how I found this group. Anyway, I typed in the name of a Mortgage Servicing Company that I've done Short Sales through. I proceeded to pull up their Linked In Employees and… Continue

Do the Banks REALLY want to do Loan Mods?

I picked up the newspaper this morning and here is yet another article on how the plight of the homeowners has become a volatile political issue. On Friday (Dec 11, 2009) "the House passed a series of new financial regulations; it narrowly defeated a provision that would have allowed bankruptcy judges to modify the term of mortgages. THE MEASURE WAS STRONGLY OPPOSED BY THE BANKING INDUSTRY."

What? Did I read that correctly? I thought they were reaching out to the homeowners, sending… Continue

Chase Finds 16% of Mods Are 'Permanent’?

Chase Finds 16% of Mods Are 'Permanent’?
A recent article highlights that JPMorgan Chase has over 140,000 borrowers in the HAMP program currently, and that only 16% will be or have been approved for “permanent” modification as they announced in Congress. Additionally only 29% of those made all of their payments on time during their 3 month trial and so now are ineligible for permanent mods. Begging the question, so is even the 16% number accurate?
This along with other examples… Continue

Where do all the Disgraced Mortgage Bankers live?

In Florida of Course. 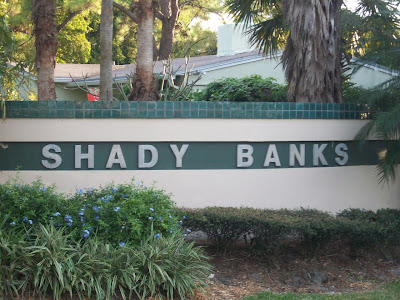 But not only do they live in Florida, they live in a special neighborhood just for these types of bank executives. They all live in an upscale subdivision in beautiful, sunny Fort Lauderdale, Florida aptly named Shady Banks, where the homestead laws favor unsavory characters of this sort. Yes, this picture does not lie and many former mortgage… Continue

I would like to share this with everyone as I have changed my attitude towards most investors. I have been blessed and I mean that sincerely, by having this one investor that buys some of the crappiest properties that have been on the market forever because it needs a roof, foundation work, mold, etc. My investor will buy this property and turn this piece of crap into a beautiful work of art! I have sold 5 of his properties this year and they all went under contract within the first 30 days! I… Continue